Blurbs
Love is in the air, along with a whole lot of sexiness, with twelve of today’s hottest romance authors. Take a trip to the past with a vivid Civil War romance, or travel to the ranch to spend the holiday with a gorgeous cowboy. Whether they’re falling in love with zombies, or the boss is hooking up with the intern, the Sexy to Go Valentine’s Day 2016 edition has the heat you need to keep you warm this chilly February.

He Said, She Said by Allyson Lindt
Emily's in a new city to start her internship, and she's going to let loose and be a new woman. When her wild night on the town turns out to be with her new boss, the stigma and rumors at work threaten to destroy her career before it starts.

Stealing His Cowgirl's Heart by Sorcha Mowbray
MJ swore she'd spent her last Valentine's Day alone after the man she loved ditched her ten years ago. Nate's home on medical leave when fate steps in to give the pair a Second chance at romance. But can the Seal steal his Cowgirl's heart, again?

Civil War Valentine by Haley Whitehall
Charlie Bristol comes to Seattle to set up a traveling Valentine’s Day exhibit. The director of the museum surprises her with a package of Civil War valentines from an anonymous donor.

During a nap she dreams she's alive during the Civil War and meets Elliot Lowery, the author of the valentines who mistakes her for his fiancée Charlotte.

Bound to the Elf by Shiloh Saddler
Corbin expected to spend Valentine’s Day alone on his property surrounded by the trees he’d make a fortune logging. Sometimes even solitary holidays do not go as planned. An elf challenges his right to the land, and the fight leads to many surprising discoveries.

The Dares That Bind by Leigh Ellwood
Alton introduces Victoria to a world of sensuality and submission, encouraging her to become a new woman. But is Alton merely a weekend distraction, or the promise of a better life?

My Zombie Valentine by Jocelyn Dex
Trista is excited to take Zeek, her zombie, out for a Valentine’s Day treat. Once back at home, Zeek surprises her with a treat of his own. (Note: This is a standalone title, but it is advised to read A Zombie Ate My Panties in Sexy to Go 10 first.)

What You Lost by Landra Graf
After being ditched by her fiancé for another woman, Clementine is done with relationships, but love isn’t done with her. Ready to take a chance at winning the woman he’d thought he lost, Shawn is going to prove to Clem they belong together. Only problem, he’s her brother’s best friend.

Daughters of Astra: Jolie's Heart by Pamela Moran
Valentine’s Day is for lovers, but Locke’s blind dedication to duty makes him question their future. How can Jolie convince him their love is strong enough to survive all destiny has in store?

Antiques Fair by Daisy Banks
Mike offers his wife a Valentine present with a difference and a purchase of an antique desk adds a spark to their romantic celebrations.

The Naked Truth by Virginnia De Parte
Becca and Kate win a weekend for two at a nudist colony. This creates more problems than they'd bargained for. Despite practicing being naked - nothing prepares them for the real thing! 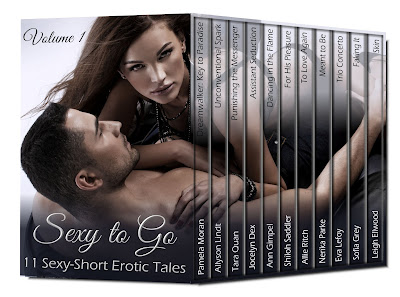 Visit the Sexy to Go Authors on the Web
http://sexytogobooks.wix.com/sexytogo


Buy Sexy to Go, Valentine’s Day 2016 Edition
99 CENTS (Limited Time)
Amazon Universal Link * B&N * ARe * iTunes * Kobo
Thanks for stopping by and checking out Sexy to Go!
Posted by Jocelyn Dex at 1:06 PM No comments: 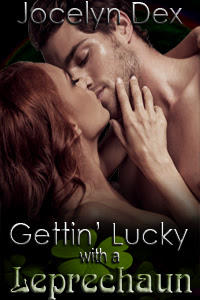 READ MORE OF THIS POST »
Posted by Jocelyn Dex at 12:09 PM No comments: 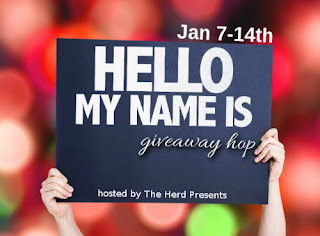 Welcome to my stop on the Hello Blog Hop!

We’re ringing in the New Year with lots of giveaways! And by sharing some fun and wacky facts about ourselves.

There’s a new giveaway at each stop so be sure to visit them all!

Hi! I'm Jocelyn Dex, author of contemporary and paranormal romance. Most of it is super HOT!