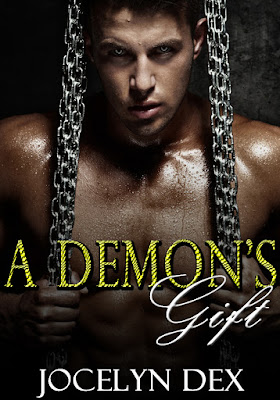 I had to give A Demon's Gift a new cover because the old one SUCKED!

It took me a while to realize it, but I finally did and made a change, I think, for the better. Much better!

What do you think?

A throaty, sexy chuckle reached her ears. Her skin instantly heated, prickled. Damn it. The cells were soundproof, but somehow the guards or Bix always managed to leave his intercom on when she was in the room. She whipped around and glared at him through the thick glass enclosure which served as his prison. “Shut up, demon.”
His lips turned down in an exaggerated frown. “I couldn’t help myself. Your childish gesture amused me. And how many times do I have to ask you to call me by my name? Say it with me—Argoth.”
It was his fault. The reason she had to keep proving her fighting skills, the reason she hadn’t made certification, the reason she was stuck down there every damn day. She’d learned to somewhat resist the manipulation of several of the others she’d been pitted against but not his. Amused him, did she? Well, let him be amused. He might be her weakness, but she knew his weakness too.
She sauntered over to his cell and slowly pulled her sweaty tank top over her head, exposing her fight-toned stomach. His eyes darkened as they travelled slowly up and down her body before finally settling on her breasts that were clad in only a thin sports bra.
He was a sex demon and had been denied all but self-release since being captured and locked up three months earlier. Denying a sex demon sex was like denying a crack addict crack—except the sex was actually good for the demon.
Her gaze dropped to his crotch and she gulped at the unmistakable bulge there. That damn sexy chuckle floated through the intercom again.
“Don’t play games you can’t control, Delia.”
“I’m in perfect control. You’re the one locked up. And don’t call me that.”
“Yes, I can see your perfect control. I’m certain it could cut through this glass and free me. Think of what we could do if you freed me…Delia.”
She followed his gaze to her chest where her painfully hard nipples peeked through the fabric of the sports bra. His voice dulled her good sense and images of what they could do floated through her mind before she regained control and snapped out of it. Goddamn it.
“Whatever. At least I get to go home, shower and find a lover.” She pressed her breasts against the glass, lowering her voice to a sultry whisper. “When he’s deep inside me, fucking me to ecstasy, I’ll think of you.” She blew him a kiss. He growled, real anger contorting his handsome face. “Oh wait. No I won’t.” She flicked his intercom off and flipped him the finger before leaving the room. 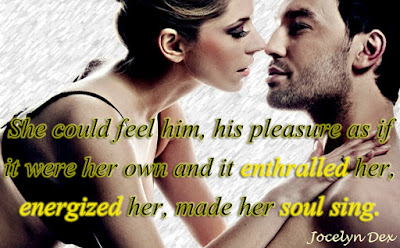 Thanks for checking it out!

Spring is here and it's time for a big giveaway from Laughing Vixen Lounge. 11 shops have come together to create one amazing Prize Pack ($280+) full of Jewelry, Perfume, Clothing, Vintage and much more! Many of the shops offer items perfect for any book lover along with lots of other unique, handcrafted and custom designs. 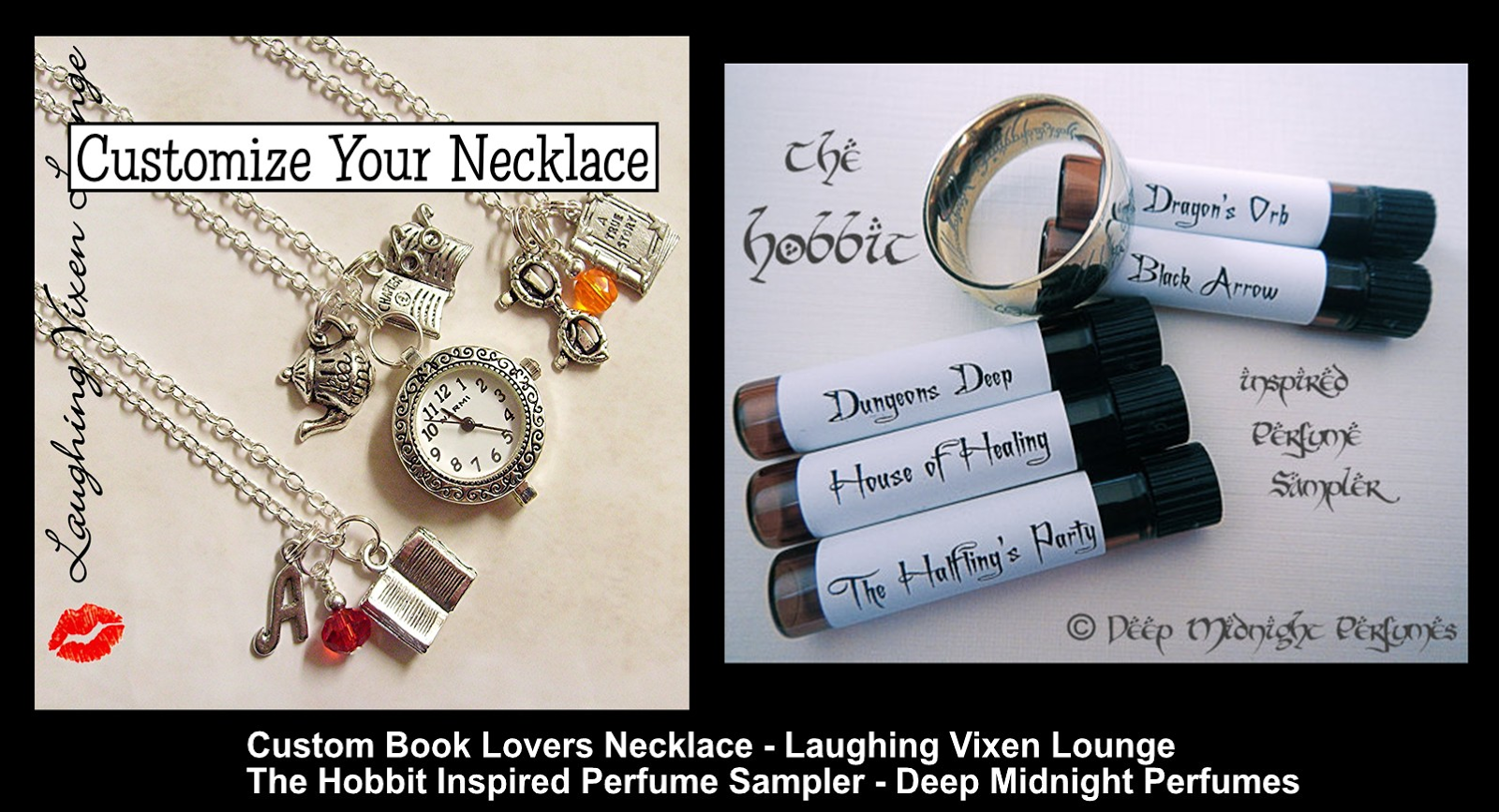 The Fabulous Spring Giveaway is open worldwide. 1 winner will win the Prize Pack. You can enter via the Rafflecopter below. Please visit the Laughing Vixen Lounge Blog and the Main Giveaway Post HERE to see the full prize list, participating shops and daily features during the giveaway. Since Summer is right around the corner the giveaway theme is Vacation Memories. Each of our participating shops, and many of our blog sponsors, will be sharing some of their favorite vacation photos with you. 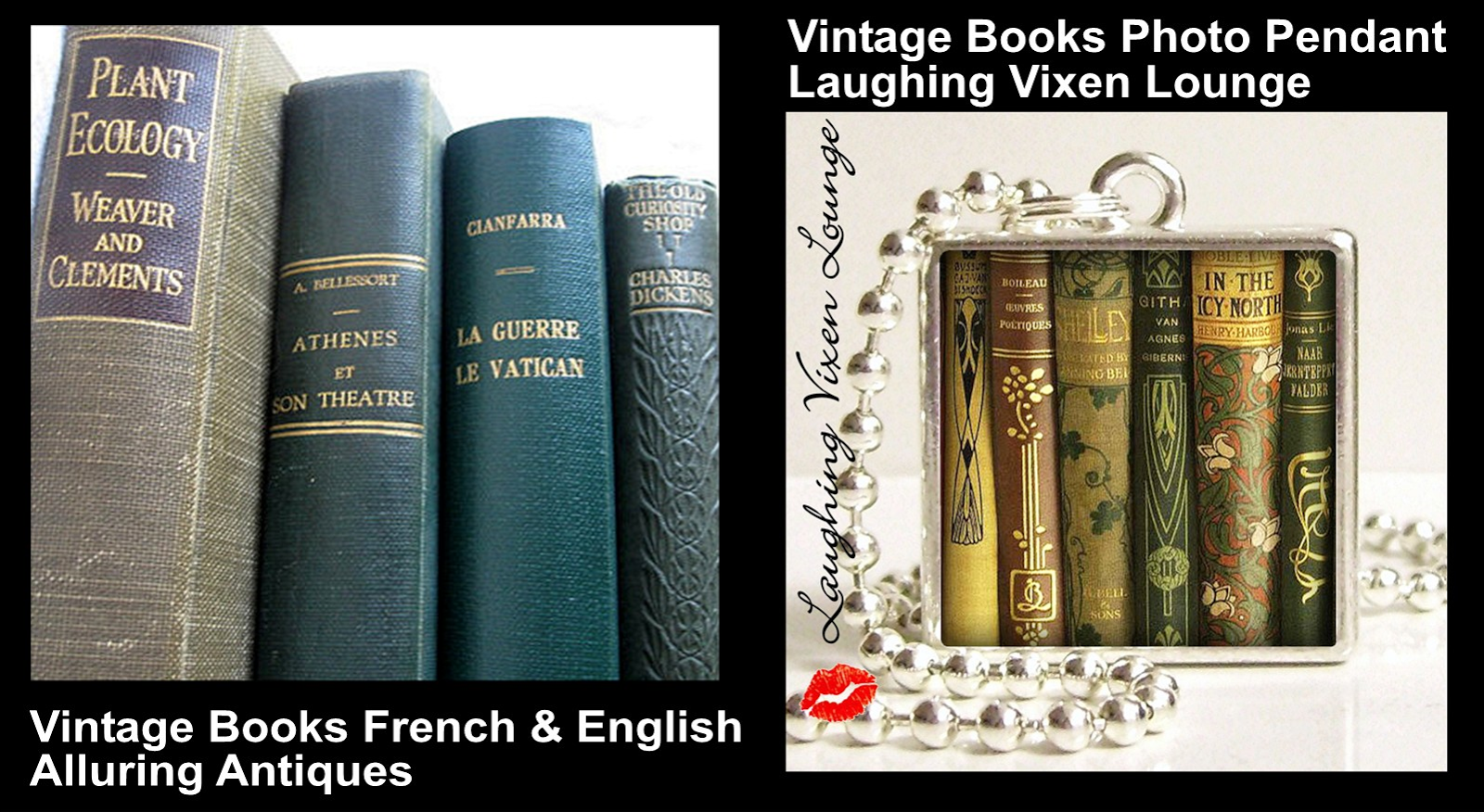 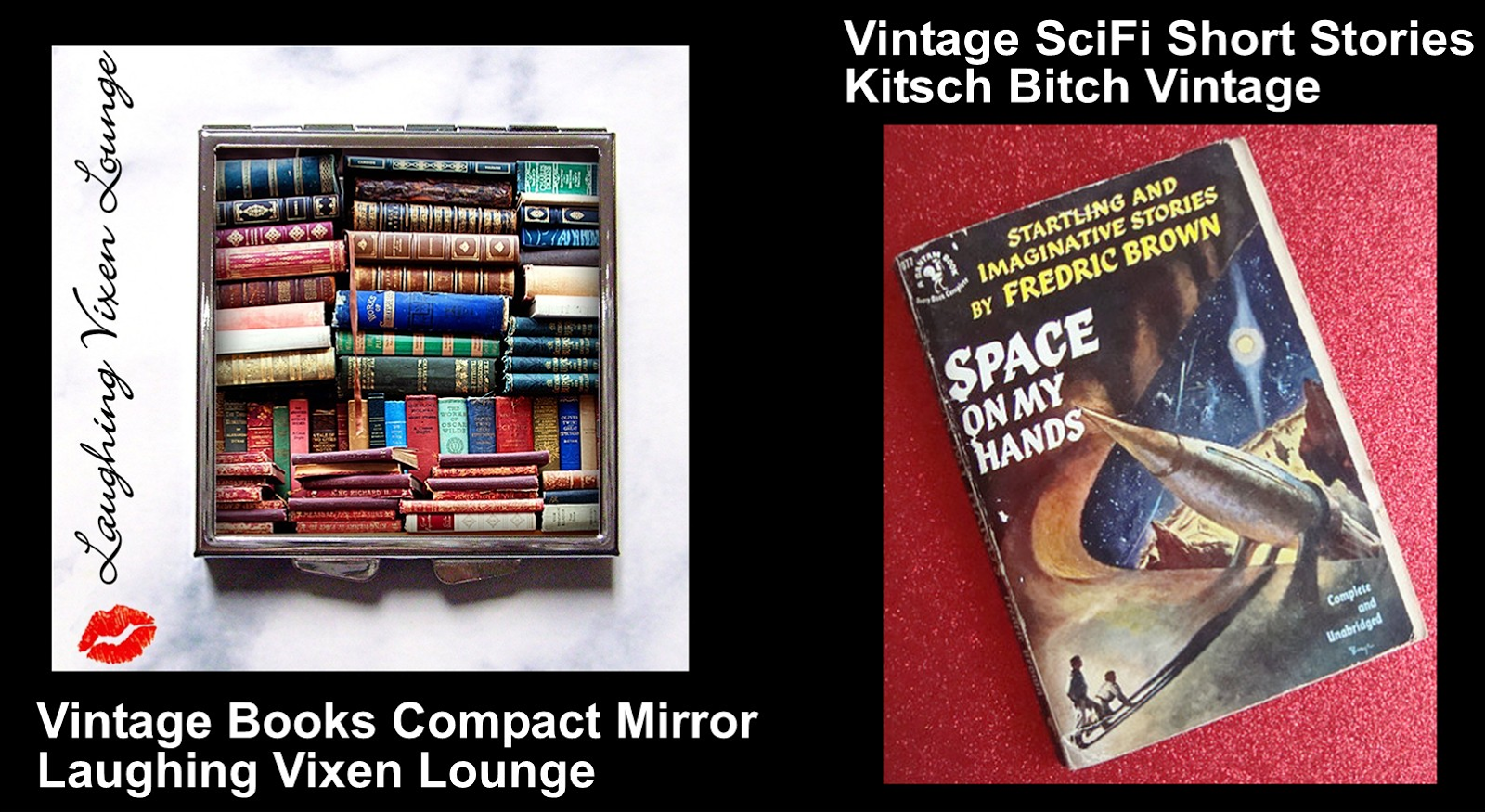 After sneaking off to confront the woman her husband had almost married, Kailee faces immediate reprisal. Damien has a creative punishment in store for his reluctant bride, one involving an audience.

Tara Quan writes romances with a smidgen of kink. Inspired by her travels, she enjoys tossing her kick-ass heroines into exotic locales, paranormal worlds, & post-apocalyptic futures.

Ghosts From the Past by Eva Lefoy
Called before the Supreme Shifter Council, Casi faces the repercussions of her impulsive actions, and their impact on the pack, but instead of reprimand, she receives the shock of her life.

Eva Lefoy writes and reads all kinds of romance, and is a certified Trekkie. She’s also terribly addicted to chocolate, tea, and hiking. One of these days, she’ll figure out the meaning of life, quit her job, and go travel the galaxy. Until then, she’s writing down all her dirty thoughts for the sake of future explorers.

A Proper Rock Chick by Sofia Grey
Rock star Charlie has stolen Daisy’s heart, but is she enough to satisfy him? A weekend away in London might just be enough to turn her into a proper rock chick.

I’m a 40-on-the-outside / 20-on-the-inside girl with a passion for the simple things in life. As long as they include wine, chocolate and rock music, I’m good. When I’m not either herding project managers (at work), cats (at home) or cub scouts (in what passes for spare time…) I’m curled up with my Kindle or my laptop. To me, writing is as addictive as reading and I can’t manage unless I have both. 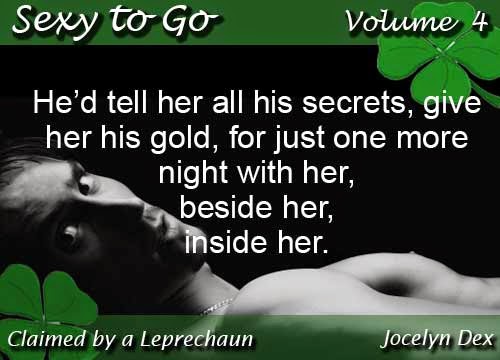 Claimed by a Leprechaun by Jocelyn Dex
Desperate to claim Sky and to explain his disappearance, Desmond takes drastic measures. Will Sky embrace Desmond and his world, or will she run in horror?

Rewriting the Law, Part 2 Daisy Banks
Ansgar Vorstil has discovered a lone female who has wandered in from the desert. Though an off-worlder she fulfills all requirements of a mate. She drank the water he offered, allowed him to strip her profane garb, and he will claim her.

Daisy Banks writes sensual and spicy novels in the Historical, Paranormal and Fantasy genres. Discover a different world with Daisy.

The Boss’s Brother by Sotia Lazu
June expects to get fired, after how she’s been ogling her boss’s brother, Dorian. She's in the midst of her own pity party when Dorian shows up. June gives him a piece of her mind—and then some.
Sotia loves romances with a twist and urban fantasy novels, always with vivid erotic elements. Her favorite characters to write are not conventional hero-material at first glance, and she enjoys making them fight for their happiness.
She shares her life and living quarters with her husband, their son, and two rescue dogs, one of which may be part-pony. Sappy movies make her bawl like a baby, and she wishes she could take in all the stray dogs in the world.
Also, she hates mornings!

Dreamwalker: Touched by Pamela Moran
Sent to protect a local lawman from a Cartel Dreamwalker, FBI agent Shaye Taggart is shocked to find the tables turned as sexy Sheriff Hawkins walks right into her dreams.

Whether painting, out on a photo shoot or writing, Pam has always had a bend toward the creative side of life. Her favorite is when she can combine any of those with travel. Places get into her blood and she loves to explore the possibilities, always with characters and a story in mind.
An astrologer for most of her adult life, Pam has been known to see auras & the occasional ghost. Considering she lives in a haunted house in the mountains of southern California, this keeps life interesting.

Sly Fox by Leigh Ellwood
Anson Fox moves to Archer Beach for a fresh start in life. He has designs on his older, gorgeous boss, but Adrian Sinclair is new to dating men. What better way to start than with the new guy in town?

Due Diligence Part 2 by Sorcha Mowbray
Lucas Bowerton needs to confirm the CFO of Darrington, Inc, Adriana Leighton, lives up to her resume. He never expected to find a sexy submissive he'd break all the rules to posses. Together they will discover if due diligence will pay off.

Sorcha Mowbray is a mild mannered office worker by day…okay, so she is actually a mouthy, opinionated, take charge kind of gal who bosses everyone around; but she definitely works in an office. At night she writes romance so hot she sets the sheets on fire! Just ask her slightly singed husband. She is a longtime lover of historical romance, having grown up reading Johanna Lindsey and Judith McNaught. Then she discovered Thea Devine and Susan Johnson. Holy cow! Heroes and heroines could do THAT? From there, things devolved into trying her hand at writing a little smexy. Needless to say, she liked it and she hopes you do too!

Almost Goodbye by Shiloh Saddler
Daniel and James are about to sell their cotton harvest. If it doesn’t bring the money needed then the bank will take James to cover the debt. Daniel wants to give his dark lover enough pleasure to last a lifetime, something they can remember if this is goodbye.

Shiloh Saddler is primarily a GLBT romance author and historical is her favorite genre. She likes to do research for her steamy romances first hand. She has invented a time machine and travels back to the 19th century on a regular basis. There are experimental settings on her time machine which could propel her into the future and even other worlds. She believes love and a good book makes anything possible.