Please introduce yourself.
My name is Smokey, and I'm a Chinese crested hairless dog -- an unexpected choice for a DEA drug-sniffing dog.  That's why I can fool the bad guys when I go undercover!  When I'm not working with my DEA handler, I'm author Marcia James' logo and virtual pet. 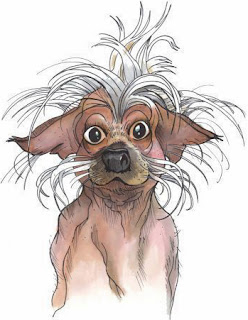 What’s your favorite book by Marcia James and why?
I'm a little biased because I starred in Marcia's first book, At Her Command, a comic romantic suspense.  If not for me, I don't think DEA agent Domino Petracelli would have broken the drug-smuggling case at a D.C. sex club OR found her happily ever after with Detective Dalton Cutter.   Getting the two of them to trust each other and declare their love was tougher than sniffing out a gram of cocaine in a dirty baby diaper.

What’s your favorite scene that Marcia James has written you into?
I'm the inspiration for the Chinese crested dog Marcia has in each of her books.  (I'm like her Hitchcock, who appeared in almost all of his movies.)  My favorite scene in At Her Command is when I found the drugs the bad guys had hidden in the battery compartments of the sex club's vibrators.  Some crooks are so dumb!

What kind of scene do you wish Marcia James would write for you?
So far, I've always appeared alone in her books, and if I'm going to be a matchmaker for the heroes and heroines, I think I deserve my own HEA with a pretty little crestie female.  ;-)

What does Marcia James do to celebrate when she finishes writing a book?
She's big on wining-and-dining with her husband, but I'd prefer a few treats, a fire-warmed family room, and some female crestie companionship!

What's next for you, Smokey?
Marcia is writing a sequel to At Her Command, and I'll be working with a male FBI agent and a female police detective to bring down some more criminals.  But, of  course, I plan to do some matchmaking while I'm at it.  I'm just a romantic at heart...  Check out all of her books, which feature cresties.  If you love Christmas stories, I recommend Heating Up the Holidays.

Chicken, bacon or cheese?  Bacon, of course!  It's the first choice for any discerning dog.

Butt sniffin’, leg humpin’, fluffy toys?  I prefer fluffy toys, but they can't be too frou-frou.  My favorite toy is a gun chew toy that makes shooting noises when I bite it.

I'm a living example of the old adage: Don't judge a book by its cover.  (Although Marcia James' books have the cutest cresties on the covers!)  I was rescued from a shelter, and now I carry a badge -- attached to my collar.  I may only be 13 inches high and weigh 12 pounds, but I can hold my own against any of those big canine crimefighters.  So I guess my final thoughts would be,  if you're in the market for a new pet, please start at your local shelter.  Adopt a shelter dog or cat.  We're all special and waiting for love.  ;-) 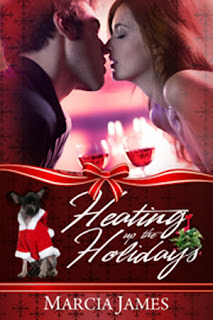 Nicky Paxton is up to her pointed elf ears in work—filling in for a sick Santa’s helper, corralling kittens in a mechanical winter wonderland and running her family’s department store chain. With only 14 shopping days until Christmas, the last thing she needs is the return of her high school heart-breaker.

Lawyer and single dad Chris Spencer leaves the Los Angeles rat race to raise his five-year-old daughter, Holly, in his sleepy Virginia hometown. His first goal is to make sure Holly has a Christmas to remember. His carefully laid plans don’t include a second chance with his first love.

When Holly asks the store Santa for a “fairy pony puppy”, Chris enlists Nicky’s help to track down the elusive item. Despite Nicky’s resolve not to re-gift her heart to Chris, their sexual attraction could power the town’s holiday light display. With the help of mistletoe, a hairless dog and a lonely child, Chris and Nicky just might get their Christmas desires.

Marcia James writes hot, humorous romances and finaled in eleven Romance Writers of America contests before selling her first comic romantic suspense, At Her Command.  In her eclectic career, she has shot submarine training videos, organized celebrity-filled nonprofit events and had her wedding covered by People Magazine. After years of dealing with such sexy topics as how to safely install traffic lights, she is enjoying “researching” and plotting her novels' steamy love scenes with her husband and hero of many years.

Give Marcia James some Web Love!

Typo of the Day

Typo of the Day

What I typed: At first, he'd licked himself...

What I meant to type: At first, he'd kicked himself...

Big difference in meaning there. :-)

Posted by Jocelyn Dex at 9:45 AM No comments:

I'm excited to announce that my short story entitled Just Once has been accepted and will appear in the Cleis Press anthology Hungry for More.Yea! There will be more news about this...later.
Posted by Jocelyn Dex at 7:49 AM No comments:

Please introduce yourself.
Hi! I’m Ammon Ra Tigris—AKA Tigger and I’m a Bengal. My family could not have predicted how aptly they named me--I am the king of bouncing, trouncing, and climbing. On everything and everyone.
READ MORE OF THIS POST »
Posted by Jocelyn Dex at 12:30 AM 3 comments:

Celebrate the release of Fin's Fantasy with me!

Valia's Villain, Book 2 of the Sempire Seductions series released in October of 2013 and Fin's Fantasy, Book 3 is already here!

Of course, I'm super excited to share Fin's story with you especially because so many people asked for Fin's story after reading Araya's Addiction, Book 1.


I hope you enjoy it!


Now, if you haven't ready book 1 or 2, please enter the giveaway below for your chance to get either book 1 or book 2 free!


Fin's Fantasy Blurb
Navine is suffering Incubus addiction--a death sentence for any Sempire. When the search for a cure turns up only one rumor, Navine is horrified to learn the mutant Fin might be her only chance to live. Fearing the taint of the mutant more than fearing death, she continues to push him away as she tries to deny how his touch inflames her desire.
Fin was captivated by Navine the first moment their gazes locked but when she realized what he was--a male Sempire, a mutant, an abomination to the species--she’d rejected him. Burning with the need to touch her, taste her, he’ll do almost anything to save her even though she belittles him at every turn.
With time running out, passion must overcome prejudice to save Navine’s life and to grant Fin’s fantasy.